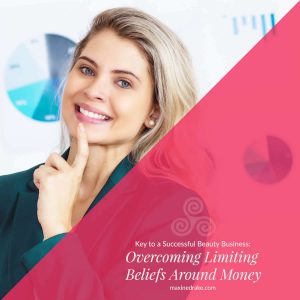 You have big plans and grand ambitions for your beauty business, yet there are certain beliefs holding you back. Let’s uncover why some beauty business owners are more successful than others. Most have overcome any limiting beliefs around money.

Remember when you were in esthetic school? We all learned basically the same things. I understand that some schools are better than others. But, we essentially learned the same skills.

Our limiting beliefs around money don’t have anything to do with our skills as an esthetician.

Turns out, it’s all in our head. What we believe about ourselves and our environment can determine what we can achieve. Any thoughts that hold us back or prevent us from getting what we want are called limiting beliefs.

Limiting beliefs can block you from building the beauty business and the life you want. In particular, beliefs around money can have a powerful influence on the success of your business.

A limiting belief is an idea we have about ourselves or our environment that limits the way we live. These beliefs can prevent us from being, doing, or having what we want in business or life.

Limiting beliefs are often formed during our childhood. It could be something that we were told or an idea we have assumed to be true. Limiting beliefs can feel so real! You may even find yourself defending your favorite ‘limiting belief’.

Overcoming your limiting beliefs is key to achieving the success you want in your business. The good news is that because we created the limiting beliefs in the first place, we also have the power to change them.

Since limiting beliefs can appear very real, you may not even recognize that they’re just constructs. Therefore, the first step is to identify your limiting beliefs and cultivate the awareness you need to overcome them.

Here are some examples of common limiting beliefs and how you can turn them around:

“I don’t deserve to make that kind of money.”

Not a single person will value you more than you can value yourself. If you don’t believe you deserve the money, how can you convince others that you do?

Write down 3-5 things you value about yourself in your journal every day. You can expand the exercise by writing down how you have added value to someone’s day.

“I am not good with money or numbers.”

This is a story many women were led to believe. But the more we avoid the subject, the more intimidating it appears. Not to mention, if you sweep your money problems under the rug, they won’t magically disappear — they’re only going to fester and get worse!

You don’t have to be a math whiz but you can’t shy away from looking at your numbers either. Take the time to learn basic financial skills and empower yourself and your financial situation.

“I don’t have what it takes to be a successful beauty business owner.”

This limiting belief exposes our fear of being successful, which usually stems from a belief that we’re not good enough.

To overcome the fears of not being good enough or being criticized, which can be holding you back from taking the actions you need to succeed, work with a mentor or coach to help you uncover your blind spots and work through your blocks.

As the saying goes, “where the attention goes, the energy (and results) flows.” The universe is paying attention.

Instead, shift your focus to what “you want” and what’s possible. Stay curious and ask questions that challenge what you think is true.

Building a successful beauty business starts with our mindset. Abundance is not about how much money you have. It’s about your “abundant state of mind” and we all have the resources within us to create it.

Ready to improve your money mindset as a beauty business owner? We recently held a Masterclass inside our Inner Circle Membership called “Uncovering Your Relationship With Money.” Join us to start learning. 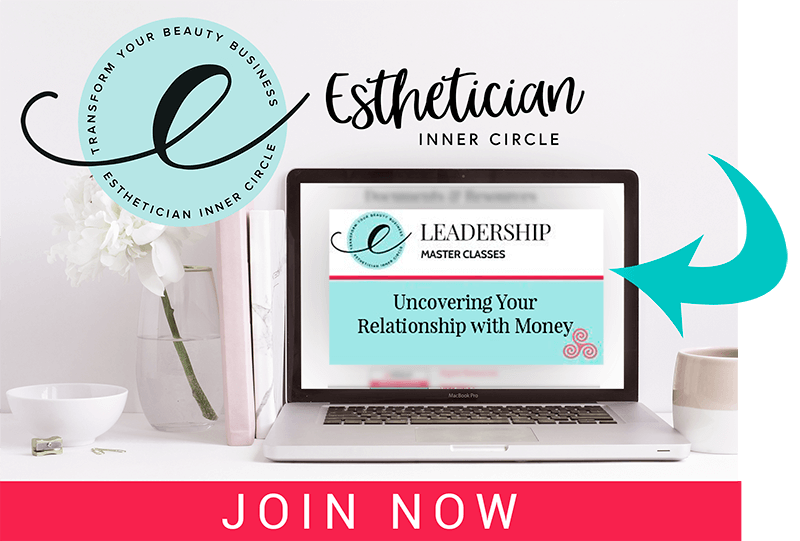